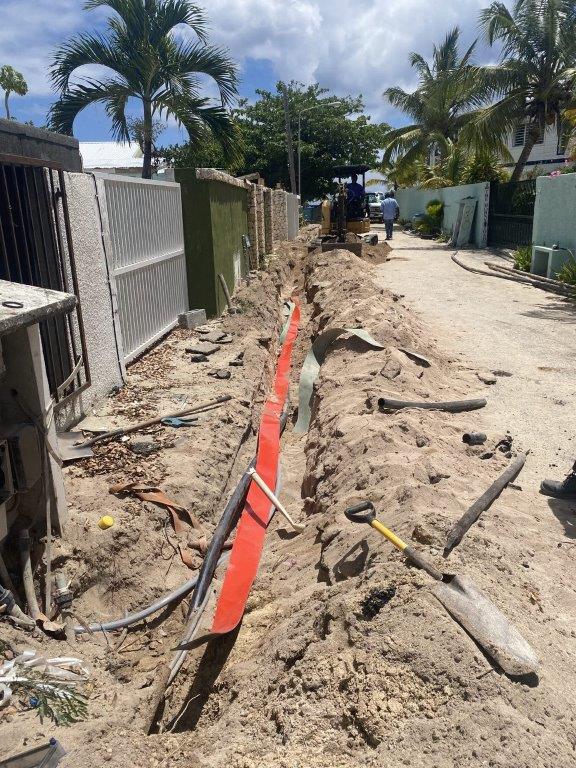 In collaboration with N.V. GEBE and the National Recovery Program Bureau (NRPB), more than nine (9) kilometers of overhead low-voltage electricity lines will be placed underground as part of major infrastructural works set to start in mid-July 2022.

From a budget of approximately US $3.8 million, the work will take place in several phases from July to the fourth quarter of 2022. The road crews of contractor Windward Roads B.V. will dig trenches on residential streets where overhead cables still exist. These cables, along with new water lines, will be rerouted underground. The work will be carried out under the guidance of N.V. GEBE personnel and activity supervisor ILACO Suriname N.V.

Empty conduits will also be placed in the trenches, paving the way for the country’s telecommunications companies to lay fiber-optic cables in the future. During the final stages, aluminum streetlight poles will be installed to replace the older wooden ones.

Acting Temporary Manager of N.V. GEBE Dr. Sharine Daniel stated that this can be seen as a continuation of underground cabling works that were kicked off by the company some years ago and that she is pleased to see it being further completed.

“N.V. GEBE had spent many millions of dollars executing at least 95% of this massive and costly undertaking and the completion of the project will surely benefit our electricity and water grids immensely and, by extension, the community of Sint Maarten,” said Dr. Daniel. She further stated that, in 2020, she finalized N.V. GEBE’s decision to upgrade the company’s electricity and water network with resources that were allocated by the Trust Fund Steering Committee to ERP-1. In 2018, the Trust Fund Steering Committee set these funds aside to support N.V. GEBE in building its resilience and restoring material damaged in the 2017 Atlantic hurricane season.

Placing these utility connections underground will expand N.V. GEBE’s existing underground network, thereby improving Sint Maarten’s resilience to natural disasters, such as a hurricane. Underground cables cannot be broken and blown around in a storm’s strong winds, which dramatically reduces the chances of power loss or debris falling on the homes of unlucky residents. It also lessens the time needed to restore electricity, water, and internet connections after a devastating hurricane strike. These critical services are vitally important in government’s efforts to coordinate post-disaster relief and recovery, as well as in helping citizens return to normalcy.

Before the start of works, residents will be notified via the media about the activities that will take place on the respective streets. Although most of the work will take place on the public roads, residents with overhead electricity lines running to their homes will be contacted by N.V. GEBE about trenching work on their property in order to connect them to the grid via underground lines. Windward Roads will replace any concrete slabs or foundations damaged by the trenching work and all reconnections will be done by N.V. GEBE technicians.

Vigorous safety protocols will be put in place to minimize the inconvenience to residents. For example, safe crossings will be placed over trenches in front of driveways and walking paths to ensure accessibility to homes and businesses. Additionally, a traffic plan has been developed to help alleviate potential congestion for motorists.  However, residents may experience increased noise and/or dust between the working hours of 7:00 am and 5:00 pm on weekdays. The availability of electricity and water will not be interrupted, except during the connection to the new underground system after the completion of works.

“Neighborhoods devoid of underground cabling were left for many weeks without electricity after the passing of Hurricane Irma, while other neighborhoods that were supplied via the underground network regained service just days after the devastation. This project is yet another step being taken to ensure that, in the event of a future hurricane, or other unfortunate disasters, the residents and small businesses in this very densely populated area of Sint Maarten will be able to bounce back quicker than in 2017,” said NRPB Director Claret Connor.

Minister of Public Housing, Spatial Planning, Environment and Infrastructure (VROMI) Egbert Doran considers this project to be a great feat. “As we continue to be threatened by hurricanes, the bounce back period after a devastation is of great importance, not only for our personal resurgence but also for the island’s economic recovery,” stated Minister Doran. He added that the inconvenience of the works will be minor in comparison to the project’s long-term benefits and asks the public to be patient and considerate during the period that the works will be ongoing.

For more information about the underground cabling activity, persons can visit www.nrpbsxm.org/undergroundcabling.

After the work has started, if anyone has an issue or grievance related to activity, they can file a complaint via the form on www.nrpbsxm.org/complaints-procedure, or by contacting the Windward Roads complaint representative at tel. 1-721-542-7520 or by sending an e-mail to info@wwr.jajo.com.