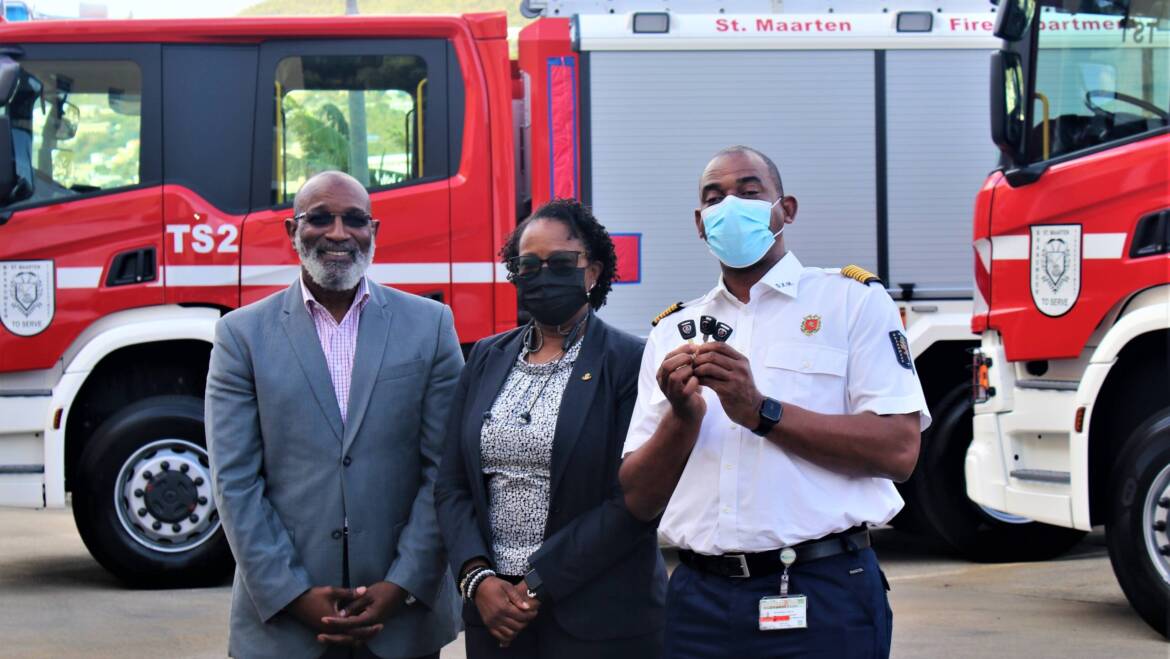 The Sint Maarten Fire Department unveiled three recently delivered, custom-made fire trucks in a ceremony at the Fire and Ambulance Building on Monday, September 6, 2021. As these vehicles are outfitted with the latest equipment and designed with the country’s unique terrain in mind, the delivered fire trucks will markedly improve the Sint Maarten Fire Department’s response capabilities to a variety of emergencies.

The journey to Monday’s ceremony began more than a year ago, when Sint Maarten Fire Department officials sat at the drawing board with the project team of the National Recovery Program Bureau (NRPB) to specify and design fire trucks suitable to the country’s needs. The vehicles had to be able to maneuver efficiently in tight spaces and operate in hilly environments.

After this process, Rosenbauer – one of the world’s leading manufacturers of fire-service vehicles and firefighting equipment – was selected to build and outfit the fire trucks. This Austria-based company provides most of the firefighting vehicles and equipment to the other islands of the Dutch Caribbean.

Rosenbauer completed the fire trucks earlier this year, and a small delegation of the Sint Maarten Fire Department visited Austria in May 2021 to inspect the finished vehicles and ensure they met the previously outlined specifications. The delegation also received training on the vehicles’ use and maintenance.

The fire trucks shipped from Austria after passing the inspection and arrived Sint Maarten in August 2021.

In commemoration of their service, the Sint Maarten Fire Department named each of the new vehicles after one of its retired colleagues – former Fire Chief Winston Salomon and firefighters Hilton G. Wilson and Godfrey “Gollie” Brooks.

Former Fire Chief Salomon had the honor of unveiling the fire truck that bears his name, while the families of the late Wilson and Brooks did the same for the other two vehicles.

“The Sint Maarten Trust Fund was established not only to rebuild the country after Hurricane Irma, but also to improve our resilience to future natural disasters of all shapes and sizes. A big part of that is continuously enhancing our emergency response capabilities using the latest technology,” said NRPB Director Connor at the official unveiling. “These firetrucks, along with the other procured equipment, are tailor-made solutions to the unique challenges that confront us as a small island. I am happy to see that the NRPB, with the active cooperation of our local and international stakeholders, has assisted in making Sint Maarten better prepared for the unseen calamities that may come our way.”

“As Prime Minister and Minister of General Affairs responsible for the Fire Department, I would like to thank all stakeholders, including the Government of the Netherlands, the World Bank, the NRPB and our Fire Department, for making this possible. I also thank Rosenbauer for the training that was provided to our firefighters on the optimal use of the trucks. These customized fire trucks will greatly improve our country’s emergency response capacity as they were designed to operate on slopes, hills, and around cramped areas,” said Prime Minister Jacobs. “I commend Fire Chief Richardson and all firefighters for their diligence and sacrifice away from their families as they guard and protect the people of Sint Maarten. As a country which faces natural disasters of all kinds, I must say that the Fire Department has done an excellent job over the past years with the limited resources they have. Growth within this department remains vital for Sint Maarten’s sustainability. As such, I trust that the experience gained by our new recruits, from those who have come before, will continue to be passed on to all others joining the department in the future. The best preparation for tomorrow is doing your best today.”

“The hardworking firefighters of the Sint Maarten Fire Department put their health and safety at risk every time an emergency call comes in. For this selfless service to the country, they deserve to work under optimal conditions with the latest equipment,” said Fire Chief Richardson. “As such, I am pleased that our dedicated men and women have new custom-made firetrucks which will enable the Department to carry out its duties in the safest possible manner.”

In addition to the fire trucks, the project has procured and delivered two diesel-powered water pumps, vehicle spare parts, breathing equipment, satellite phones and radios, helmets, and safety shoes to the Sint Maarten Fire Department within the last two years. This represents approximately US $2.7 million in investments.

The project will also acquire three pick-up trucks and four command vehicles, and these are expected to be delivered to the Sint Maarten Fire Department in 2022.