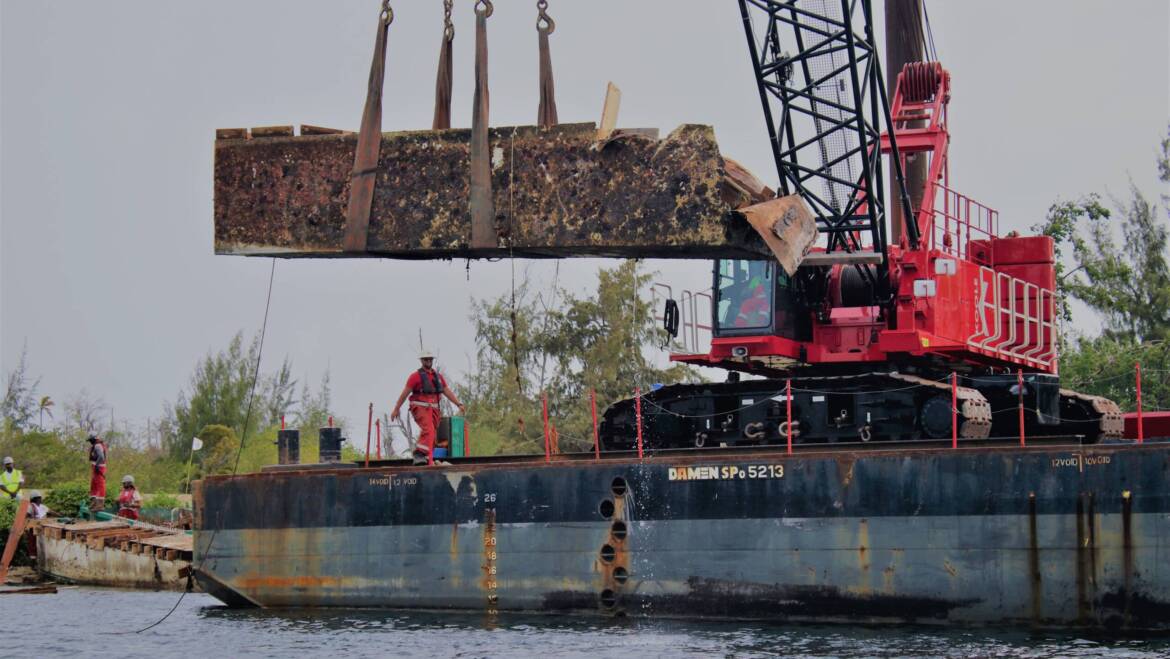 A half-sunken houseboat, a capsized catamaran, and many other pieces of storm debris were recently removed from Mullet Pond under the Emergency Debris Management Project (EDMP) of the Sint Maarten Recovery and Resiliency Trust Fund, which is financed by the Netherlands, managed by the World Bank, and implemented by the NRPB.

Left in the wake of the catastrophic Hurricanes Irma and Maria in 2017, these wrecks posed severe hazards to the vulnerable Mullet Pond, which is an internationally recognized protected wetland under the Ramsar convention.

The Ramsar convention of 1971 provided a framework for an international treaty on the conservation and sustainable use of wetlands. Of the more than 2,300 Ramsar sites worldwide, the Dutch Kingdom is home to 55, including one in Sint Maarten.

The houseboat was removed by first cutting the hull into sections and attaching each piece to a crane with the help of a diver. Before being transferred onto the waiting salvage barge, each pre-cut piece was lifted out of the water and suspended close to the surface for several minutes to test its structural integrity. This was done to prevent possible excess debris ending up in other areas of Mullet Pond if the wreckage buckled under its own weight.

The capsized catamaran had to be removed differently because the surrounding water was too shallow to allow the salvage barge to come alongside the wreckage. Instead, the crew refloated the vessel and maneuvered it to the pond’s entrance, where the water is deeper. There the wreck was lifted onto the barge for transport and further processing.

As of June 10, 2021, some 58 shipwrecks have been removed from Simpson Bay Lagoon and Mullet Pond through the EDMP.

The wrecks were all taken to the secured site next to the causeway roundabout for decommissioning, where individual waste materials are separated and placed into containers.

A total of 37 wrecks have been completely stripped and decommissioned thus far, filling some thirty (30) 40-foot containers with fiberglass, wood, and general debris and another four (4) containers with metals, such as steel, aluminum, and copper.

The containers are to be exported abroad for reuse and/or disposal, thus reducing the amount of waste ending up in the country’s overburdened landfill. The containers are being temporarily stored at Sint Maarten Shipyard.

The less complicated shipwrecks have been salvaged and removed, and the remaining part of the project will focus on more complex jobs, such as larger ships, as well as those submerged and/or close to shore. The shipwreck near the pelican roundabout by the airport – known locally as the “Pink Iguana” – is one of the vessels on the removal list.

About 120 shipwrecks in the Simpson Bay Lagoon and the surrounding waterways are slated for removal under EDMP. The removal of these shipwrecks is expected to be completed in October 2021.

Alongside the shipwreck removal activities is shoreline clean-up, where subcontractor Bobby’s Marina is using a crew of 15 locals to remove debris found within five (5) meters on either side of the water’s edge in the Simpson Bay Lagoon and Mullet Pond.

The crew has cleaned approximately 7.4 kilometers of shoreline so far, which has resulted in the removal of more than 100 tons of trash, such as plastics, wooden pallets, household waste, and construction materials. The found debris even included concrete pillars, a complete pallet of bricks, and a submerged golf cart.