HomePress ReleasesERP1Emergency ServicesSecond round of repairs to police stations to...

Second round of repairs to police stations to commence 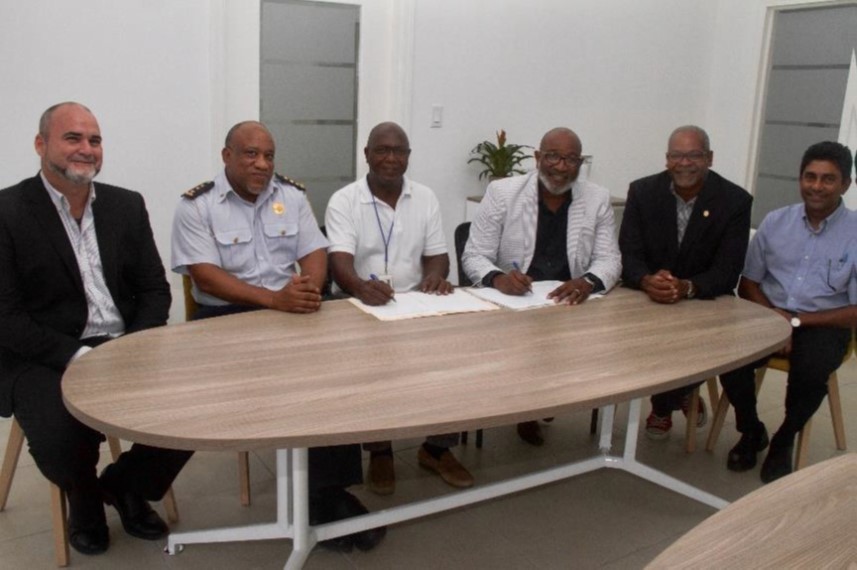 PHILIPSBURG – A few short weeks after the conclusion of the first round of repairs, second phase renovations to the Philipsburg and Simpson Bay police stations were given the green light on Friday, June 14th. On behalf of the National Recovery Program Bureau (NRPB), Director Connor signed a works contract with Drive Tech, an experienced Sint Maarten based contracting company. As part of the Emergency Recovery Project of the St. Maarten Trust Fund, Drive Tech will renovate the roofs ceilings, floors and wall partitions of both stations, which suffered extensive hurricane damage in 2017. Simultaneously, works will be completed to the air conditioning system and ducts, the IT system and electrical cabling on behalf of the Ministry of VROMI. The total costs for the second phase are approximately 1.1 million US dollars.

Signing on behalf of the NRPB was Director Claret Connor and Gaston Fraser on behalf of Drive Tech NV. Also present at the signing were the Minister of Justice, the Honorable Cornelius de Weever, Representative of the Netherlands, mister Chris Johnson, Police Chief Carl John and the supervising contractor Ravindra Patandin of ILACO Suriname NV. The works are expected to be completed within approximately three months. During the brief signing ceremony, all parties expressed their satisfaction with the project plan which foresees in renovations that will make the police stations more resilient and better able to withstand future hurricanes.