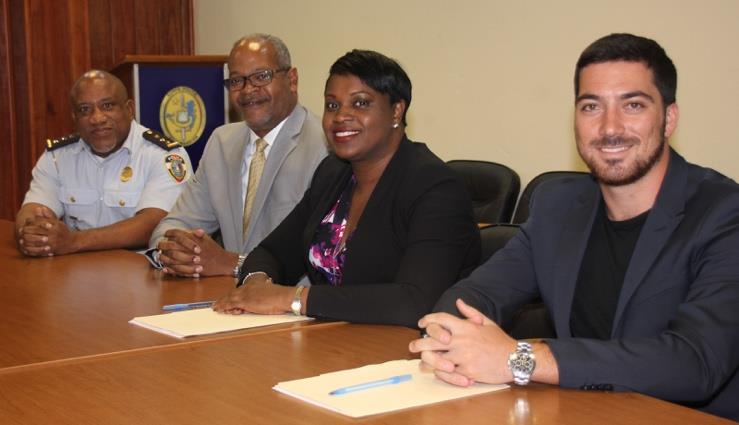 PHILIPSBURG – On Tuesday January 8th, in the presence of Minister of Justice Cornelius de Weever, Chief of Police Carl John and main contractor Luca Benmoha of Aluminum Systems BV’s, Prime Minister Leona Romeo-Marlin signed the contract for the 1st phase of repairs to the Police Stations in Philipsburg and Simpson Bay. The contract amount is little over $400 000.00 US Dollars. The funds for the repairs come from the Emergency Recovery Project of the World Bank Trust Fund.

“I would like to thank the Prime Minister and the World Bank for their assistance in getting this project moving forward, so that the repairs at the Philipsburg and Simpson Bay Police Stations can be completed before the start of the 2019 hurricane season. I am well aware that the staff of the Police Department is eager to see the works start, with the goal of improving their working environment”, said Minister of Justice Cornelius de Weever.

The signing of the contract has signaled the start of works on Wednesday January 9th, which are expected to be finished at the beginning of April 2019.

During the signing ceremony Prime Minister Romeo-Marlin said, “I would like to give special thanks to all persons involved in this project, the Police Department project team, the technical team at the Ministry of VROMI and the Interim Recovery Committee for their hard work thus far.”