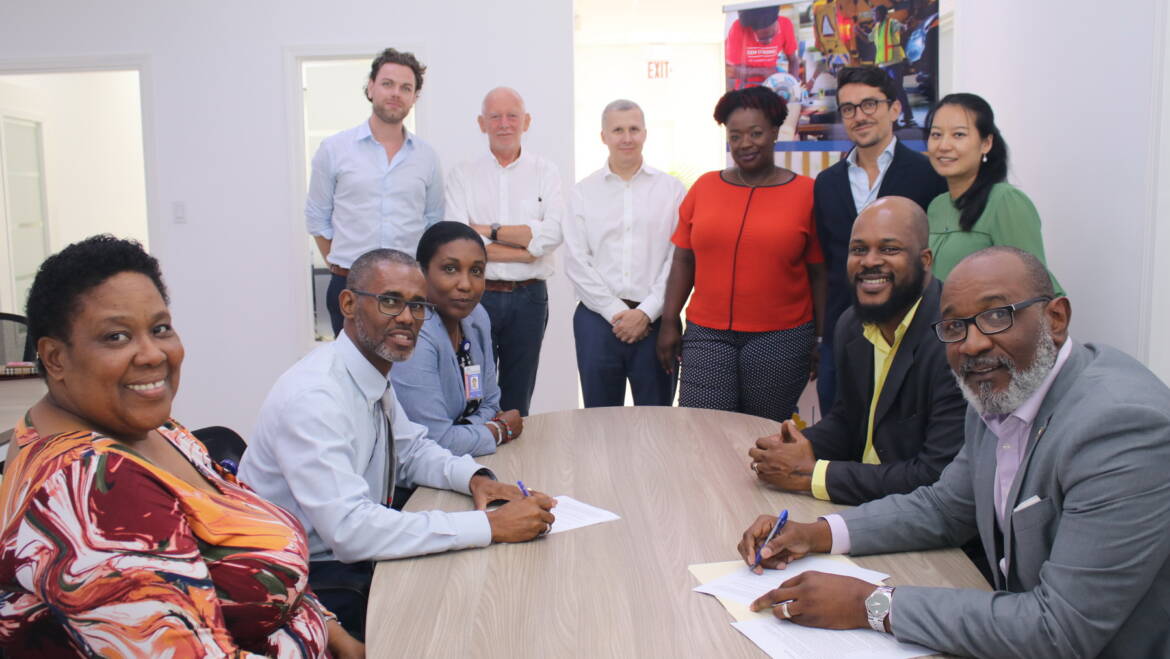 PHILIPSBURG The resistance of Sint Maarten’s electricity network and water supply to natural disasters will be greatly improved with the execution of the Water and Electricity Resilience Program of the National Recovery Program Bureau (NRPB) and NV GEBE.  On Tuesday, August 20th, in the presence of Miklos Giterson, Minster of Public Housing, Spatial Planning, Environment and Infrastructure (VROMI), a subsidiary agreement was signed between NV GEBE and the National Recovery Program Bureau (NRPB).

In the coming years, the NRPB and GEBE will collaborate to put the remaining over-head electrical cables underground, upgrade transformer stations and replace analog electrical meters with digital meters.  Damaged water tanks will be rebuilt with increased capacity, and pump houses with pump and equipment will be built.  Additional equipment will also be replaced.

“This grant money, generously provided by the Dutch taxpayers, has allowed us to genuinely build in the elements of resilience and long-term development into the recovery of our island” Director of the NRPB Claret Connor reflects. “Following hurricanes Irma and Maria within record time many residents were comforted with the return of water and electricity.  This new program will finish what was started in 1995 after the passing of hurricane Luis and we will be able to place those remaining low tension electrical cables underground as well as make other significant and much needed upgrades to various substations, etc.”

The signing of the agreement marks the start of 11.6 million US dollars’ worth of recovery activities, including 3.1 million for improvements to the electricity network and 7.9 million to increase the resilience of Sint Maarten’s water system. “I am extremely satisfied that we have progressed to this stage as NV GEBE remains highly vulnerable to challenges caused by climate change.  By moving the remaining low-voltage cables underground they will no longer be vulnerable to wind and flying debris. Our water distribution system will be strengthened with the repairs and the addition of new water tanks.” Minister Giterson expressed. “A great deal of my time as Minister has been spent ensuring that the physical infrastructure of our island is ultimately strengthened, and this project brings us one step closer to that goal.”

During the short signing ceremony NV GEBE CEO Kenrick Chittick thanked the Government of the Netherlands, the World Bank, the Government of Sint Maarten and the NRPB for the opportunity to fully restore the country’s water and electricity distribution network. “The company was able to make a number of enhancements on its own in the aftermath of the hurricane.  We are happy that, in addition to the repairs to come, a portion of the already completed repairs will be retroactively financed by the Trust Fund as well. Revenues of the company have been affected by a significant drop in demand as a result of the economic shock caused to the economy by Hurricane Irma, which in turn has weakened the company’s financial viability.  With this program we will now be able to do much more than we would have been able to do on our own.”