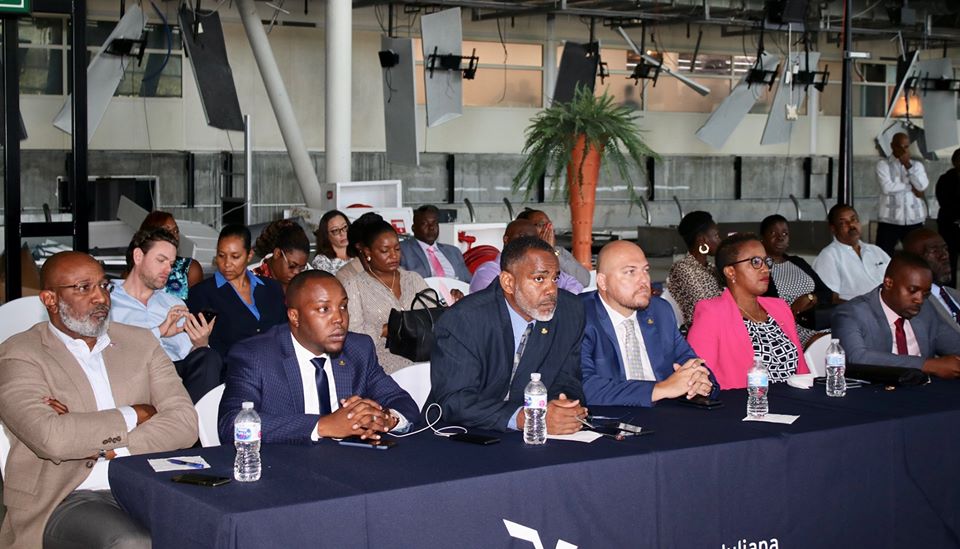 In their first week in office, the Jacobs Cabinet made the efforts surrounding the reconstruction of the Princess Juliana International Airport (PJIAE) their first order of business. On Tuesday, November 19, the Council of Ministers met with the National Recovery Program Bureau (NRPB) and the Airport Managing Board and Project Management Team to discuss the status of the legal agreements for the Airport Terminal Reconstruction Project. During the meeting, the Council of Ministers received detailed presentations on the legal and financial aspects of the project that serves to rehabilitate the badly damaged terminal building

Prime Minister Silveria Jacobs thanked the NRPB and the Airport for their clear presentations, “It is unfortunate that the legal advisors of the bondholders have stalled the process which would have further allowed us to be much further along with many agreements needed to finalize our airport reconstruction” she stated after Tuesday’s meeting.

On Wednesday, November 20, the Ministers were given an onsite presentation about the phased plan approach for the full reconstruction of the terminal. The presentation was followed by a walk-through tour of the present facility and the temporary extension in the departure hall. This extension was realized to assist with the forecasted capacity increase during the upcoming winter season. An additional 250 seats will be made available, with a bar, restrooms and 2.5 additional gates.

The Airport project team also showcased how new technology is incorporated in the designs of the terminal reconstruction. Improvements will include three additional gates to the terminal, baggage belt upgrades, check in kiosks, and the addition of new escalators and elevators to provide better access for the physically impaired. These upgrades will enhance the passenger experience, help to efficiently manage the flow of passengers and will prepare the terminal for US preclearance.

“This project is more than just building back an airport facility,” NRPB Director Claret Connor concluded after the tour. “We are enhancing our destination and this will have a positive trickle-down effect to the life of each and every resident of Sint Maarten.”

In describing the improvements, Airport CEO Brian Mingo stated that, “PJIAE is the engine to Sint Maarten’s tourism product so we need to give our visitors that great passenger experience. With the efforts of rebuilding the entire structure, including the addition of new automation services, we will strive to recapture our title as one of the best airport’s in the Caribbean.”

Following the visit on Wednesday, the Council of Ministers, the NRPB and PJIAE immediately continued working on all pending matters with regard to the financing of the Airport Terminal Reconstruction Project. In accordance with the 2019 budget of the Government of Sint Maarten, the funds for the remodeling of the airport terminal are being secured through a grant agreement of US $72 million US Dollars from the Dutch financed Sint Maarten Trust Fund and US$50 million from the European Investment Bank.

“There are some final legal hurdles that we have to take, but I’m confident that with the support of all involved parties, including the bondholders of the airport, we are able to sign the relevant agreements in the coming weeks.” Minister of Finance Ardwell Irion indicated after a busy first week in office.