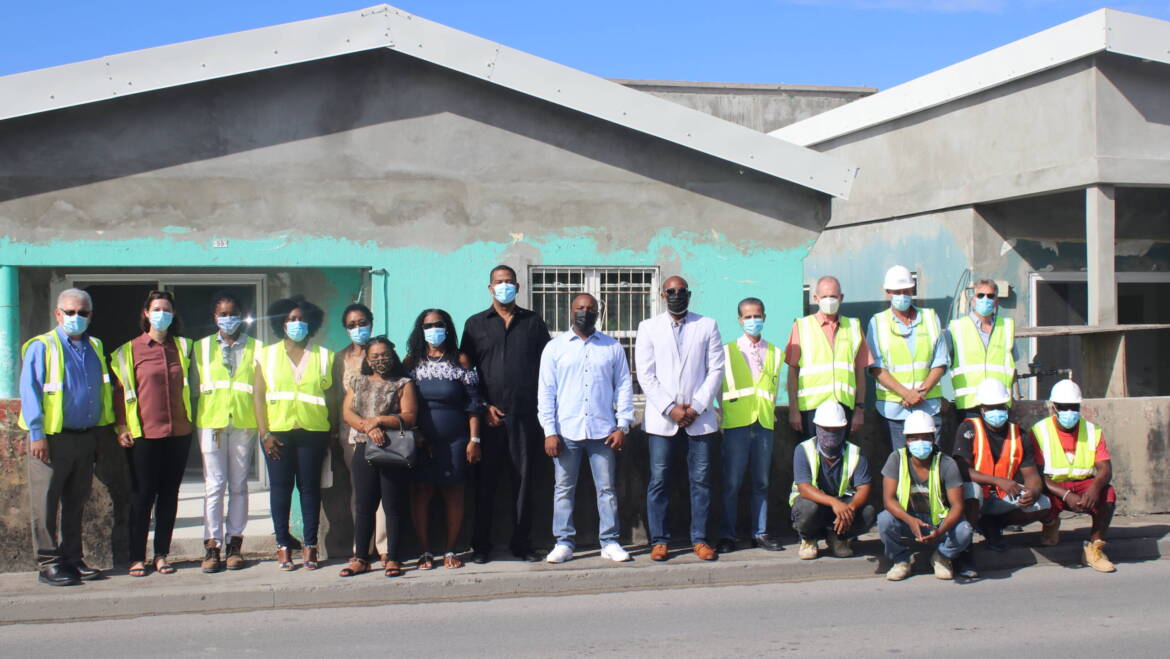 Now firmly in its third phase, the Private Home Repair Program of the Sint Maarten Trust Fund is steadily moving along with repairs to homes damaged by Hurricane Irma in 2017. It is anticipated that when the program wraps up in mid-2021, repairs to the roofs, doors, and windows of approximately 200 private homes will be completed. To date, fifty-one homes have been finalized and another ten homes are slated to be done before the year’s end.

“The pilot project and minor works homes took a lot longer than anyone anticipated. But there were some very important lessons learned that we have implemented, and works are now starting to pick up the pace.” Claret Connor, Director of the National Recovery Program Bureau (NRPB), explained. “The recent shutdowns caused by the pandemic was the biggest factor in time lost. In addition, because some of our labor force is from the French side of the island,  we also lost a lot of time with the French riots of late last year and the more recent border closings.”

On  Connor’s  invitation,  the Ministers of Public Housing, Spatial Planning, Environment and Infrastructure (VROMI) and Public Health, Social Development, and Labor (VSA) were requested recently to participate in the “handing over” of three repaired houses to their respective owners. On site, Works Contractor, Liccom, and Supervising Consultant, Build Change, took the Ministers through the technical improvements given to each home.  Also highlighted were the COVID-19 prevention and mitigation measures enforced at each worksite.

“Each handover brings with it a new sense of accomplishment.  We wanted the Ministers on hand so that they can get a first-hand account of the work that is being put into every house” Connor revealed when talking about the handovers. “It was especially nice for the Ministers to interact with the homeowners and to hear their experiences of participating in this home repair program. Each homeowner’s experience is unique, but all are grateful for  the assistance provided through this project.”

“Nothing is more precious than being able to lay your head under your own roof once again. ” One homeowner said after being given the keys to their home. They continued on say that “My family and I are very thankful.”

All roofs in the program are being repaired or reinforced according to the Ministry of VROMI’s build back better policy enacted after the 2017 hurricanes. At each home, every opportunity is made to strengthen and reinforce the repaired roofs to withstand future hurricanes; even the new doors and windows installed are Category-5 hurricane resistant. The Minister of VROMI, the Honorable Egbert J. Doran, empathized with the families due to the devastation experienced with the passing of the major hurricanes back in 2017. The Minister has pushed for further rapid repairs. “I’m glad to see initiatives like this get off the ground, finalized and handed over to the families in order for these families to move forward with their lives. As a Member of Parliament, and now as Minister, my wish is to see this project completed speedily and I am committed to seeing that happening.”

Minister of VSA, the Honorable Richard Panneflek commented that at the end of the tour he was   especially pleased to hear about the special additions that we are able to add to the homes of particularly vulnerable residents. “The addition of things like wheelchair ramps and wider doorways are the extra touches that make the world of difference. I commend the project team for managing the funds in such a way that we could make the extras possible.”

The Private Home Repair Project is an activity under the Emergency Recovery Project 1 of the Dutch funded Sint Maarten Trust Fund which is managed by the World Bank and implemented by the NRPB on behalf of the Government of Sint Maarten.