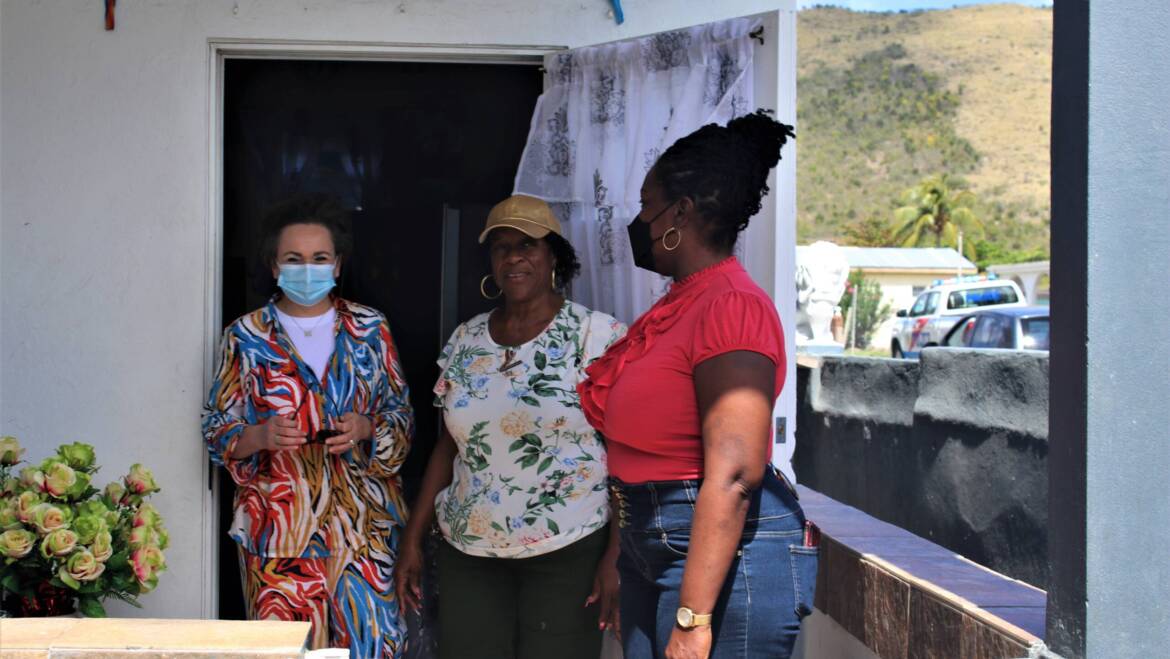 This was part of the State Secretary’s official work visit to Sint Maarten, which took place from February 17-20, 2022.

Guided by personnel of the National Recovery Program Bureau (NRPB), State Secretary Van Huffelen used the tour as an opportunity to get a first-hand look at the ongoing results of the various Trust Fund projects. Currently, the NRPB is implementing eight (8) projects financed by the Trust Fund. Accompanying the State Secretary on the tour were Prime Minister Silveria Jacobs, Minister of Public Housing, Spatial Planning, Environment and Infrastructure (VROMI) Egbert Doran, Dutch Representative in Sint Maarten Chris Johnson, and NRPB Director Claret Connor.

Van Huffelen started the day with a brief introductory meeting at the NRPB’s office in Philipsburg, where she learned about the organization and its role as a project implementation unit.

The tour’s first official stop was at a lookout point on Guana Bay Hill, which gave Van Huffelen a “bird’s eye” view of the landfill on Pond Island. From this vantage point, NRPB personnel briefed the State Secretary about the planned improvements to the main landfill and the so-called “Irma dump” under the Emergency Debris Management Project (EDMP).

Moving on from there, the tour stopped at several family homes in Sucker Garden, some of the more than 140 recipients of the private home repair program of the Emergency Recovery Project (ERP-1). Here, Van Huffelen listened to the residents as they spoke about their experience in the program and how it positively impacted their lives.

The next stop was at the Discovery Kidz Day Care Center in Dutch Quarter. The institution’s managing team took the State Secretary around the grounds, showing the renovations and enhancements that were made possible through the Resources for Community Resilience (R4CR) project.

The fourth stop was on Bush Road, where Van Huffelen spoke to two small business owners about the Enterprise Support Project (ESP) and how the project’s direct financial support allowed their business to succeed despite the devastating economic effects of the COVID-19 pandemic.

The tour ended on the Simpson Bay Lagoon. Facilitated by the Dutch Caribbean Coast Guard, the State Secretary took a boat ride around the Lagoon to gain insight into the recently concluded shipwreck salvaging and removal activity of the EDMP. This activity was a tremendous success, as it removed 139 damaged vessels out of the Lagoon and cleaned approximately 10 kilometers (km) of the surrounding shoreline.

“I am very impressed with the fantastic work that the NRPB is doing for the people of Sint Maarten. The residents that I spoke to were very happy with their well-renovated, refurbished houses. The Simpson Bay Lagoon also looks beautiful again thanks to the NRPB’s valuable work,” said Van Huffelen after the tour.

“As the director of the NRPB, I am proud of what has been achieved through the Trust Fund so far. This could not have happened without collaboration and support of the Government and people of Sint Maarten, the World Bank, and the Government of the Netherlands. The NRPB will continue to diligently implement the various projects of the Trust Fund, as the benefits are being felt by so many people across a vast cross-section of our society,” said NRPB Director Connor.